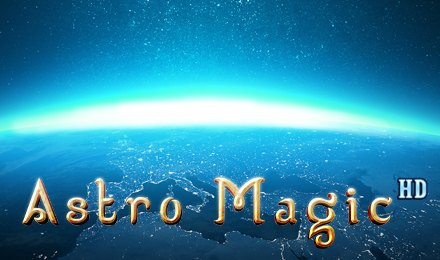 Fables about the alignment of the stars were always existent in the virtual realm as well. In fact, one such story is about the Astro Magic. Back in the days, virtual denizens were keen star-gazers, watching the stars and checking out the constellations. Each constellation was associated with a power. And such a remarkable beauty of the night sky definitely spawned numerous nocturnal festivities. According to the fables, the demi-gods of astronomy were so impressed that they sent two powerful shards of the most radiant objects of the sky; the Sun and the Moon. These shards were, unfortunately, lost in time and the festivals of night were forgotten! Until the introduction of the Astro Magic Slot by iSoftBet.

This game proposed to restore the beauty of the night with its charming graphics and who knows, the magical shards of the sun and moon might grant you some features!

Sign up an account on Vegas Spin to play Astro Magic Slot. This dazzling slot game is quite simple and does not feature any complex rules. Start off by adjusting the bets according to your preferences and click the spin button. Any time you manage to line three or more matching symbols along a pay line, you are awarded a win! Here’s more about bets;

Bet Levels: There are no bet levels on Astro Magic Slot.

Coin Values: You can set the bets of your choice on Astro Magic Slot. Select from a minimum of 0.09 up to a maximum of 90.00 by using the user-interface tab.

Wild Symbol
The mysterious design that was first spotted in the sky has now been converted in a Wild Symbol. It was said to shift forms according to seasons. On Astro Magic Slot as well, it can substitute for any other symbols of the game except for Scatters.

Scatter Symbols
The Hexagon Symbol stands for the Scatter Symbol of the game. It can award you scatter wins up to 1800 unites!

Instant Bonus Feature
The first shard that fell from the heavens was the Sun Symbol. It could grant an instant fortune to anyone who bears it but it was said to have ended in pieces. Hit three or more Sun Symbols on the reels of Astro magic Slot to activate an instant bonus feature with Free Spins and Multipliers.

Galaxy Bonus Feature
The second one, the Moon Symbol is said to have had one complete round of the galaxy before ending on the virtual realm. As such, it manages to collect various wishes from plenty of alien citizens. Yes, they believe in wishing stars in the virtual realm! If you hit three or more Moon Symbols, you activate the feature where you have to pick to be awarded a cash prize of up to 550x.

Are you ready to tune in Astro Magic Slot? Good luck!
Forgot your details?
Not a member yet? Join now