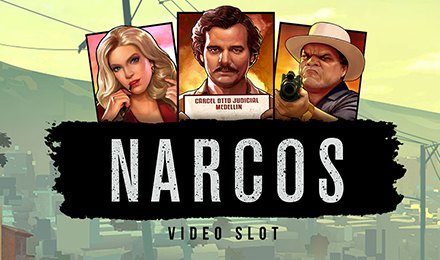 The long awaited Narcos Slot has arrived! We all have watched the epic television series, now we can spin to win on the Narcos video slot. Players will find all the familiar faces from the famous show on their reels. Narcos Slot is a 5 Reel, 3 Row and 243 pay way slot packed with various features. Players will uncover the Drive by and Locked Up feature as they play. You will be able to play Narcos at Vegas Spins and play it on your Mobile, tablet or laptop.

Playing Narcos Slot is simple! Get started by fixing the Bet Levels at where you want to play. Use the Level Selector to do this. It is found on the bottom left of the screen. You will find levels 1 to 10, use + and – to choose the number you want. Then pick the amount you want to spin. If you use the Max bet, you will be able to play using the 243 Bet Ways. Press on the + and – to select the coin value. Players can also activate the AUTOPLAY feature. Just pick the number of spins you would like and let the slot spin for you.

Amount of Paylines Selection: This slot does not use bet lines, it has 243 bet ways available to its players.

Locked Up Feature
This feature kicks in when three or more Locked Up symbols appear in the same row. Players will only find the Locked up and the Golden Locked up symbol on this feature. These symbols are a picture of Pablo Escobar and a Golden Suitcase. The Golden Lock Up symbol can give the player features such as, a Multiplier, upgrade symbols or the Big Starting Value. The Locked Up feature starts with 3 initial spins. If a another Locked up symbol appears and adds to an existing cluster and creates a new winning cluster, the number of spins returns to 3.

Drive by Feature
As you play, you may unlock the Drive by feature. When this happens, car appears from the rear of the reels and starts shooting at the screen. bullets holes appear on the screen, turning high valve symbols into Wilds. Any wins you pick up during this session, will be added to your total wins. There is also the potential of triggering the Locked Up or Free Spins features while using the Drive by feature.

Free Spins
If 3 Scatter Symbols appear anywhere on reels 1, 3 and 5 on the main game. This activates 10 Free spins for the player. As the Free Spins play out, on each spin there is a possibility that high value symbols will turn into Walking Wilds. When the Free Spins end, any Wilds left on the reels. Then one spin is awarded. This will carry on until there are no more Walking Wilds left on the reels.
Forgot your details?
Not a member yet? Join now