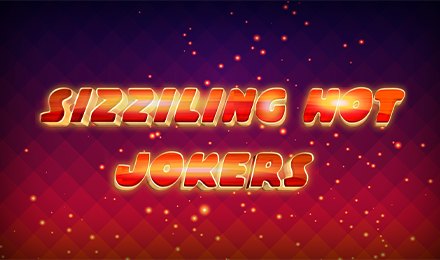 A fruity adventure awaits you on Sizzling Hot Jokers Slot! Chow down these bold fruits and spin its 5 reels to jump at the chance of exciting prizes. This entertaining slot was created by Section 8 Studios and comes packed with rewarding features. Help yourself on this jackpot game which is randomly awarded no matching symbols required. Win Both Ways is another feature that helps players win both left to right and right to left. Play Sizzling Hot Jokers Slot on the move via your iOS & Android devices.

Sizzling Hot Jokers Slot is a fruity slot that is easy to play. All your wins on this slot are multiplied by the bet per line. The symbols pay left to right and vice versa on consecutive reels. It can start from either the rightmost or the leftmost reel. Note that on this slot, only the highest win is paid on an active win line. On the reels, there are symbols such as the 3 golden BARS, cherries, Lucky 7s, citrus, watermelon, bells and horseshoe. To get you started, select your bet and spin the reels for chances of huge wins.

Expanding Wild:
During your gaming session on Sizzling Hot Jokers Slot, the Joker Wild will crop up anywhere on reels 2, 3 or 4 either on some or all of the reels. When that same symbol or symbols come into view, they will expand and fully cover the reels. The Joker Wild acts as a substitute and can replace all symbols. After the Joke Wilds expand, they activate a single complimentary Re-spin during which they stay in their spot. When the complimentary Re-Spin is launched and another wild appears, this will award you with another complimentary Re-Spin. In addition, the wild symbol will remain in its location together with any previously expanded wild symbol for another Re-Spin. During this feature, players can win up to 3 consecutive complimentary Re-Spins.

Jackpot:
Ready to hit the huge jackpot? You can create a possibility of winning big by spinning the reels of Sizzling Hot Jokers Slot. The progressive jackpot prize is awarded randomly where no symbol combinations are necessary.

Win Both Ways:
This is a feature that will allow you to win bother left to right on Sizzling Hot Jokers Slot and right to left.
Forgot your details?
Not a member yet? Join now